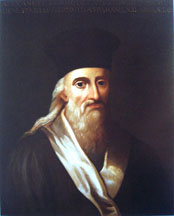 Alexandre de Rhodes, SJ, was a missionary in Vietnam.

Alexandre de Rhodes was born in France in 1591. Entering the Jesuits, de Rhodes soon decided to dedicate his life to missionary work. A Jesuit mission had been established in Hanoi, Vietnam, in 1615, and de Rhodes arrived there soon after. He spent 10 years in and around the Court at Hanoi, where he wrote the first Vietnamese Catechism. He wrote many books about Vietnam, but de Rhodes’s most significant work was the first Portuguese-Latin-Vietnamese dictionary. The dictionary was later used by scholars to create a new Vietnamese writing system, based on the Roman alphabet, which is still used today.

Suspicion of Christians led to a 10-year exile in the Portuguese colony of Macau, off the Chinese coast. De Rhodes was able to return to Vietnam for six years before being sentenced to death for his missionary work. The sentence was commuted to exile, and de Rhodes spent time in Rome before beginning a new mission in Persia. He died in Persia in 1660.