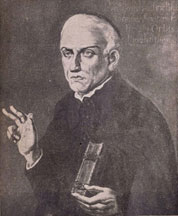 José de Anchieta was from the Canary Islands. He was a highly influential figure in Brazil’s history in the first century, after its discovery by a Portuguese fleet in 1550. He was one of the founders of Sâo Paulo and Rio de Janeiro. But more than that, Anchieta was a renowned poet and writer. He is considered the first Brazilian author.

As with other Jesuits, Anchieta communicated with his superiors mainly by letters, writing (it is said) flawlessly in Spanish, Portuguese, Latin, and Tupi, an indigenous language. He also wrote volumes on theology, theater, and poetry, and composed the first published work in the Tupi language.

Anchieta wrote a famous poem to the Virgin Mary, allegedly writing it every morning on the wet sand of a beach and committing it to memory, until he could much later transcribe its more than 4,900 verses to paper.

His lucid and detailed reports are still important today to understand the lives, knowledge, and customs of the indigenous people and the Europeans during this time. His writings also detail the astounding novelties of Brazil’s wildlife and geography.