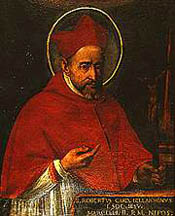 St. Robert Bellarmine, SJ, was one of the most important cardinals of the Catholic Reformation and became a Doctor of the Church.

Robert Bellarmine was born to an impoverished noble Italian family. His early intellectual accomplishments gave his father hope that Bellarmine would restore the family’s fortunes through a political career. His mother’s wish that he enter the Society of Jesus prevailed.

On completion of his studies, Bellarmine taught first at the University of Louvain in Belgium. In 1576 he accepted the invitation of Pope Gregory XIII (1572-1585) to teach polemical theology at the new Roman College.

Robert Bellarmine spent the next 11 years teaching and writing his monumental Disputations on the Controversies, a three-volume defense of the Catholic faith against the arguments of the Protestant reformers. A confidant to the popes, Bellarmine held a number of positions, including rector of the Roman College, examiner of bishops, Cardinal Inquisitor, archbishop of Capua, and bishop of Montepulciano.

Through his writings Bellarmine was involved in the political, religious, and social issues of the time. He argued with King James I of England and was a judge at the trial of Giordano Bruno. Bellarmine also communicated the decree of condemning the Copernican doctrine of the movements of the earth and sun, issued by Congregation of the Index to Galileo Galilei in 1616.

Although he was one of the most powerful men in Rome, Bellarmine lived an austere life. He gave most of his money to the poor. Once he gave the tapestries from his living quarters to the poor, saying that the walls wouldn’t catch cold. While he took little regard for his own comforts, he always saw to it that his servants and aides had everything they needed.

St. Robert Bellarmine was canonized by Pope Pius XI in 1930 and declared a Doctor of the Church in 1931.

The Art of Dying Well (PDF)

The text of Bellarmine’s book The Art of Dying Well.

This video, produced by the Apostleship of Prayer, offers some words by Robert Bellarmine.