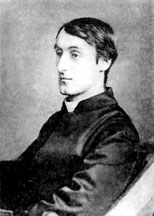 Hopkins’s poetry exists today only because his friends published it after his death. Hopkins, who was only 5’2” tall, suffered his entire life from both physical problems and severe depression.  As a student at Oxford, he converted from the Church of England and was received into the Catholic Church at the age of 22. His patron, Cardinal John Henry Newman, offered him a job, but instead Hopkins joined the Jesuits.

Worried that poetry would be a distraction from leading a religious life well, he essentially stopped writing from about the time of his conversion until 1875. In that year Hopkins wrote “The Wreck of the Deutschland,” about the heroic sacrifice of a group of German nuns who were crossing the North Sea to England when their boat sank in a storm. This was a challenging poem, and even Hopkins’s friends didn’t like it. “I wish those nuns had stayed at home,” wrote one friend. When Hopkins submitted the poem to a Jesuit magazine, it was rejected. But it got him writing again.

Many think of the poetry of Gerard Manley Hopkins as playful. He can leap from image to image, showing the uniqueness of each thing and how God is manifest everywhere. Lines such as “The world is charged with the grandeur of God” or “Glory be to God for dappled things” exemplify that. But closer to his sadly torn heart were probably lines like these:

My own heart let me more have pity on; let

Me live to my own sad self hereafter kind,

Charitable; not live this tormented mind

With this tormented mind tormenting yet.

First installment of a documentary about Hopkins. As a young man Hopkins was enamored with the experience of beauty in the Victorian age.

Gerard Manley Hopkins (Part 2)Under the influence of John Henry Newman, Hopkins was received into the Catholic Church. Before he entered the Society of Jesus, Hopkins burned all the poetry he had written to that time. This installment of the documentary ends by noting Hopkins’s poetic vision matured as he studied the philosophy of Duns Scotus.

Gerard Manley Hopkins (Part 4)Hopkins continued to develop his unique vision and language of poetry. In Liverpool and Glasgow he ministered to the needs of the struggling workers in the industrial age.

Gerard Manley Hopkins (Part 5)Hopkins was sent to teach in Dublin. In his last years, Hopkins felt as if God had abandoned him. His poetry was published by a friend after his death.

God’s Grandeur (Favorite Poem Project)American Poet Stanley Kunitz (in his 80s) describes his discovery of Gerard Manley Hopkins in 1926 and the stunning influence of “God’s Grandeur.”