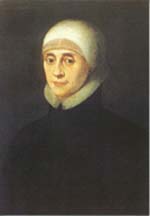 Mary Ward founded a religious community for women dedicated to active service, drawing on the Society of Jesus as an organizational model.

Mary Ward was born to a Catholic family in North Yorkshire, England, just a few years before the defeat of the Spanish Armada. The family was determined to practice the Catholic faith in spite of the ongoing hostility. In 1589 the family home was burned down, but Mary and her sisters were saved by her father.

At the age of 15, Mary Ward felt called to religious life. Ward entered the Poor Clare convent in Saint-Omer in France. At the time the only option for religious life for women was in cloistered communities. Mary Ward, however, wanted to give active service to God and others. Thus began her extraordinary journey.

At the age of 24, Mary gathered a number of companions and formed a religious community. In creating a structure for her religious community, Mary Ward drew on the Constitutions of the Society of Jesus. Church authorities, however, were implacably opposed to the idea of religious women being active in any ministry outside of the enclosed walls of the cloister.

The community grew in the face of severe opposition. They ministered to imprisoned and persecuted Catholics openly on the European continent, secretly in England. Mary was imprisoned by the English government and later by the Inquisition in Rome. While she was personally admired, Mary Ward’s congregation was suppressed in 1630. There was also an effort to destroy all related documents so as to erase the memory of Mary’s work. Returning to England in 1642, Mary died surrounded by a few companions in 1645. Although she was continually frustrated in her dreams, Mary Ward never lost confidence in her relationship with Jesus.

Mary Ward’s legacy survives today in the Institute of the Blessed Virgin Mary worldwide, and in the newly renamed Congregation of Jesus in England.

Quote: “Women in time to come will do much.”