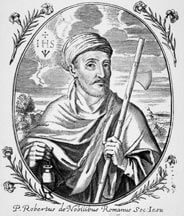 Robert de Nobili, SJ, was a missionary to India, especially known for his evangelization strategies for proclaiming the Gospel to the people of India.

De Nobili was born to an Italian noble family. He was related to two popes and was expected to achieve great things for his family. In the midst of his studies, de Nobili gave up on his family’s dreams and joined the Society of Jesus. Inspired by the adventurous stories of the missionaries to Africa and Japan, de Nobili prepared himself for the missions. He was sent to India, arriving in Goa in 1605.

Initially de Nobili lived within the Portuguese enclosures, surrounded by the benefits of European culture. He studied Tamil, the local language. De Nobili was then challenged by his superior to enter into the interior of India and convert those outside the walls. De Nobili discovered that among upper class Hindus, the Portuguese were considered part of the low caste.

De Nobili adopted the garb of Brahmin scholars, gave up meat, and carried the walking stick and water jug used by Hindu monks. He learned Sanskrit to read Hinduism’s holy books, and translated Christian psalms and prayers into Tamil.

De Nobili spent the rest of his life living as an ascetic in the manner of the Hindu holy men. With this strategy, he had considerable success in converting members of both the higher and the lower castes to Christianity. He died in 1656, faithful to his Catholic faith and to the spiritual disciplines he practiced in the Hindu environment.