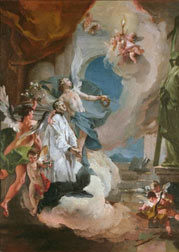 St. Aloysius Gonzaga left his powerful family to become a Jesuit priest and died as a young man caring for plague victims.

Aloysius Gonzaga was the firstborn in a powerful Italian noble family, one that was deeply involved in the ongoing business of dealing and double-dealing, treachery and betrayal that marked the political life of the time. Aloysius was thrust into adult responsibilities at the age of four when he began his training as a soldier and courtier. At the age of eight he served in the court of Grand Duke Francesco I de’Medici.

Aloysius Gonzaga began to suffer from kidney disease, and in the process of recovery spent time in spiritual reading and prayer. At the age of nine Gonzaga made a private vow of chastity.

The political intrigue and corruption surrounding Aloysius would take the lives of two of his brothers, but he had strong spiritual allies. Aloysius Gonzaga received his first Holy Communion from St. Charles Borromeo. Aloysius also began to teach catechism to young boys. Much to the displeasure and anger of his father, Aloysius announced his intention to become a Jesuit. His family tried to convince him to be a secular priest so that they could “buy” him a bishopric. Aloysius was adamant, and at the age of 18 he signed away his legal claim to his family lands and title.

In 1585 Aloysius was accepted as a Jesuit novice. In Rome his spiritual director was St. Robert Bellarmine, who counseled Gonzaga to spend less time in private devotions and more time befriending and counseling his companions. Never in good health, Aloysius successfully continued his studies. When the plague hit Rome in 1591 he actively cared for the sick. Aloysius developed the symptoms of the plague and died soon after on June 21, 1591.

Aloysius Gonzaga was canonized in 1726 and named Patron of All Students in 1729.