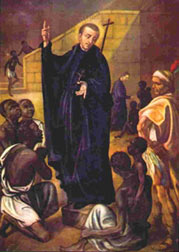 St. Peter Claver, SJ, was a member of the Society of Jesus and is the patron of African missions and of interracial justice, due to his work with people who were enslaved in Colombia.

Peter Claver was born to a prosperous family in Verdu, Spain, and earned his first degree in Barcelona. He entered the Jesuits in 1601. When he was in Majorca studying philosophy, Claver was encouraged by Alphonsus Rodriguez, the saintly doorkeeper of the college, to go to the missions in America. Claver listened, and in 1610 he landed in Cartagena, Colombia. After completing his studies in Bogotá, Peter was ordained in Cartagena in 1616.

Cartagena was one of two ports where slaves from Africa arrived to be sold in South America. Between the years 1616 and 1650, Peter Claver worked daily to minister to the needs of the 10,000 slaves who arrived each year.

When a ship arrived, Peter first begged for fruits, biscuits, or sweets to bring to the people who were enslaved. He then went on board with translators to bring his gifts as well as his skills as a doctor and teacher. Claver entered the holds of the ships and would not leave until every person received a measure of care. Peter gave short instruction in the Catholic faith and baptized as many as he could. In this way he could prevail on the slave owners to give humane treatment to fellow Christians. Peter Claver baptized more than 300,000 enslaved people by 1651, when he was sickened by the plague.

In the last years of his life Peter was too ill to leave his room. The ex-slave who was hired to care for him treated him cruelly, not feeding him many days, and never bathing him. Claver never complained. He was convinced that he deserved this treatment.

In 1654 Peter was anointed with the oil of the Sacrament of the Sick. When Cartagenians heard the news, they crowded into his room to see him for the last time. They treated Peter Claver’s room as a shrine, and stripped it of everything but his bedclothes for mementos. Claver died September 7, 1654.

St. Peter Claver was canonized in 1888. His memorial is celebrated on September 9.

Saint Peter Claver
Video introduction to the life of St. Peter Claver, produced by the Apostleship of Prayer.