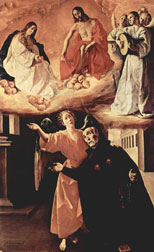 Some saints attack the world head-on, like St. Peter Claver, the friend and disciple of St. Alphonsus Rodriguez. Others like Alphonsus himself fight personal battles against failure, loss, temptation, and disease. We tend to admire more activist champions such as Peter Claver, who worked among slaves for forty years. But why should we think any the less of saints such as Alphonsus, who was more like us in his ordinariness and suffering? And who showed us how to be faithful in long lasting spiritual and personal struggles?

Alphonsus’s early years in Segovia, Spain, are a story of tragedies. When he was fourteen, his father died and he left school to help his mother run the family business. At twenty-three he married, but his wife died in childbirth three years later. Within a few years his mother and son also died. On top of this, his business was failing, so he sold it. Recognizing a late vocation to religious life, he applied for admission to the Jesuits at Segovia, but was refused because he was not educated. Undaunted, Alphonsus returned to Latin school, humbly bearing the ridicule of his adolescent classmates. Finally, in 1571, the Jesuit provincial accepted him as a lay brother. He was sent to Montesione College on Majorca, where he served as doorkeeper for forty-five years.

His post allowed him to minister to many visitors. And he became the spiritual adviser to many students. He exerted wide-reaching influence, most notably in guiding St. Peter Claver into his mission to the slaves.

Alphonsus adhered to a few simple spiritual guidelines that navigated him through his troubles and trials. For example, a method for finding joy in hardship:

Another exercise is very valuable for the imitation of Christ—for love of him, taking the sweet for the bitter and the bitter for sweet. So, I put myself in spirit before our crucified Lord, looking at him full of sorrow, shedding his blood and bearing great bodily hardships for me.

As love is paid for in love, I must imitate him, sharing in spirit all his sufferings. I must consider how much I owe him and what he has done for me. Putting these sufferings between God and my soul, I must say, “What does it matter, my God, that I should endure for your love these small hardships? For you, Lord, endured so many great hardships for me.” Amid the hardship and trial itself, I stimulate my heart with this exercise. Thus, I encourage myself to endure for love of the Lord who is before me, until I make what is bitter sweet. In this way learning from Christ our Lord, I take and convert the sweet into bitter, renouncing myself and all earthly and carnal pleasures, delights and honors of this life, so that my whole heart is centered solely on God.

In his old age, Alphonsus experienced no relief from his trials. The more he mortified himself, the more he seemed to be subject to spiritual dryness, vigorous temptations, and even diabolical assaults. In 1617 his body was ravaged with disease and he died at midnight, October 30.

Yet God (that hews mountain and continent,
Earth, all, out; who, with trickling increment,
Veins violets and tall trees makes more and more)
Could crowd career with conquest while there went
Those years and years by without event
That in Majorca Alfonso watched the door.