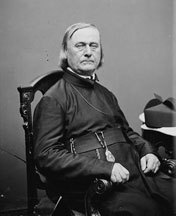 Pierre-Jean De Smet, SJ, was a missionary to the Native American people in the Rocky Mountains and Pacific Northwest. He became the most trusted white man among the various tribes and greatly influenced the final peace with the Sioux in 1868.

Fr. De Smet was born in Belgium. He became interested in doing mission work among the Native American people and immigrated to the United States in 1821. After joining the Jesuits, he was sent to St. Louis, Missouri, where he was ordained in 1827.

De Smet’s missionary journeys into the western United States were partly due to the work of Jesuit missionaries two centuries before. A Native American tribe in Montana, the Salish (Flathead) tribe, heard of the “black robes” from a group of Iroquois trappers who had joined their community. The Iroquois had been introduced to Christianity in the 1600s. Between 1831 and 1839 the Salish and the neighboring Nez Perce tribes sent delegations to St. Louis to request a “black robe” be sent to them so they could learn about Christianity.

This began the journeys of Fr. De Smet, which over the years would cover over 180,000 miles throughout the Rocky Mountains and parts of the Pacific Northwest. Funding was always scarce, and De Smet made 19 crossings of the Atlantic to raise money from popes and kings. In the process of establishing missions, he risked his life again and again on the hard trails and earned the respect and trust of all the tribes that he worked with, creating bonds of peace among the people.

Because Fr. De Smet was so trusted, in 1868 the U.S. government asked him to travel into the territory of the hostile Sioux to petition them to meet with a peace commission. Fr. De Smet arrived at the camp of 5,000 Sioux warriors, where he met with Chief Sitting Bull and was warmly welcomed. At De Smet’s urging the Sioux sent a delegation to meet the peace commissioners, leading to a peace treaty signed in 1868. In 1870 he returned to the Sioux to establish a mission. Three years later he died and was buried at Florissant, Missouri, where he had completed his novitiate 50 years before.