Alfred Delp was a German member of the Society of Jesus, who was executed for his resistance to the Nazi regime.

Alfred Delp was born in Mannheim, Germany, to a Catholic mother and a Protestant father. Although baptized Catholic, he was raised and confirmed a Lutheran. At the age of 14 he left the Lutheran church and received the sacraments of First Eucharist and Confirmation as a Catholic. In his later life Delp was a fervent promoter of better relations between the churches.

Delp joined the Jesuits in 1926. In the next 10 years he continued his studies and worked with German youth, made more difficult after 1933 with the interference of the Nazi regime. Delp was ordained in 1937.

Unable for political reasons to continue his studies, Delp worked on the editorial staff of the Jesuit publication Stimmen der Zeit (Voice of the Times), until it was suppressed in 1941. He then was assigned as rector of St. Georg Church in Munich. Delp secretly used his position to help Jews escape to Switzerland.

Concerned with the future of Germany, Delp joined the Kreisau Circle, a group that worked to design a new social order. He was arrested with other members of the circle after the attempted assassination of Hitler in 1944. After suffering brutal treatment and torture, Delp was brought to trial. While he knew nothing of the attempted assassination, the Gestapo decided to hang him for high treason.

Delp was offered his freedom if he would renounce the Jesuits. He refused and was hanged February 2, 1945. His body was cremated and his ashes spread on an unknown field.

While his physical remains disappeared, Alfred Delp left behind letters smuggled out of prison. They reveal a man of courage who told the prison chaplain accompanying him to his death, “In half an hour, I’ll know more than you do.” 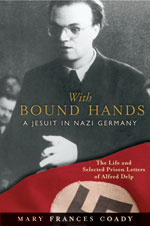 With Bound Hands: A Jesuit in Nazi Germany: The Life and Selected Prison Letters of Alfred Delp (Book)

With Bound Hands by Mary Frances Coady tells of Fr. Alfred Delp’s struggle to maintain his faith in the face of imminent death. During Delp’s incarceration and persecution at the hands of the Nazis, he writes of his fear, sadness, and anger, and then of his transformation from an “unholy character into a saint.”

How Autumn Can Enhance Your Spiritual Retreat

The Light of Grace Is Always Shining