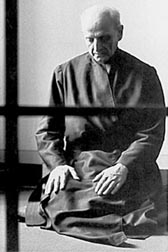 Pedro Arrupe, SJ, was the 28th Superior General of the Society of Jesus, leading the Society in the realities of serving the Church and people in the post-Vatican II world. Arrupe was a man of great spiritual depth who was committed to justice.

Arrupe was born in the Basque region of Spain in 1907. After some years of medical training, Arrupe entered the Jesuits in 1927. In 1932, the Republican government in Spain expelled the Jesuits from the country. Arrupe continued his studies in Belgium, Holland, and the United States. After being ordained, Fr. Arrupe was sent to Japan in 1938. He hoped to work there as a missionary for the rest of his life.

After the December 7, 1941, bombing of Pearl Harbor, the Japanese security forces arrested Arrupe on suspicion of espionage. He was kept in solitary confinement. Arrupe described the privation and uncertainty he suffered as he waited for the disposition of his case. He missed celebrating the Eucharist most of all. In the midst of his suffering, Arrupe experienced a special moment of grace. On Christmas night, 1941, Arrupe heard a group of people gathering outside his cell door. He could not see them and wondered if the time of his execution had come.

Suddenly, above the murmur that was reaching me, there arose a soft, sweet, consoling Christmas carol, one of the songs which I had myself taught to my Christians. I was unable to contain myself. I burst into tears. They were my Christians who, heedless of the danger of being themselves imprisoned, had come to console me. (Pedro Arrupe: Essential Writings, Kevin Burke, Maryknoll, NY: Orbis Books 2004, p. 57)

After the few minutes of song, Arrupe reflected in the presence of Jesus, who would soon descend onto the altar during the Christmas celebration: “I felt that he also descended into my heart, and that night I made the best spiritual communion of all my life.” (Ibid. p. 58)

When the security forces came after 33 days to release him from captivity, Arrupe was convinced that they were coming to execute him. The experience of captivity filled him with a deep inner calm founded on a radical trust in God.

Arrupe moved to Nagatsuka, on the outskirts of Hiroshima, where he resumed his duties as the master of novices for the Japanese mission. On August 6, 1945, he heard the sirens wail as a single American B-29 bomber flew over the city. He did not think much of it and expected to hear the all-clear siren soon. Instead he heard an enormous explosion and felt the concussion that blew in the doors and windows of his residence.

Moving outside Arrupe and his colleagues saw the first of the 200,000 casualties of the atomic bomb. Walking up the hill they saw the city of Hiroshima turning into a lake of fire.

Ministering to the Wounded

Arrupe decided to use his medical training to help whomever he could. He and his colleagues were able to give aide to 150 victims. Knowing nothing of the dangers of atomic radiation, they were perplexed and distressed at the many deaths of people who seemed to have no external injuries. Arrupe and his fellow Jesuits had only the most basic food and medical supplies and had to care for people without anesthetics or modern drugs. Nevertheless, of the 150 people whom they were able to take in, only one boy died from the effects of his injuries.

Discovering the Heart of the Poor

When visiting a Jesuit province in Latin America, Pedro Arrupe celebrated the Mass in a suburban slum, the poorest in the region. Arrupe was moved by the attentiveness and respect with which the people celebrated the Mass. His hands trembled as he distributed communion and watched the tears fall from the faces of the communicants.

Afterwards, one especially large man invited Arrupe to his home. The man’s home was a half-falling shack. The man seated him in a rickety chair and invited Fr. Arrupe to observe the setting sun with him. After the sun went down, the man explained that he was so grateful for what Arrupe had brought to the community. The man wanted to share the only gift he had, the opportunity to share in the beautiful setting sun.

Arrupe reflected, “He gave me his hand. As I was leaving, I thought: ‘I have met very few hearts that are so kind.’”

Superior General of the Jesuits

Pedro Arrupe was serving as the Superior of the Jesuits’ Japanese Province when he was elected Superior General of the Society of Jesus in 1965. He held the position until 1983.

As the 28th Superior, or “Father General,” it was Arrupe’s task to guide the community through the changes following Vatican II. He was most concerned that the Jesuits make a commitment to addressing the needs of the poor. His work resulted in the decree from the 32nd General Congregation, Our Mission Today: The Service of Faith and the Promotion of Justice, passed in 1975. This led the Jesuits, especially in Latin America, to work in practical ways with the poor. In spite of threats against their lives—threats that led to the murder of six priests in El Salvador in 1989—the Jesuits continued their justice work with the poor, with Arrupe’s support.

Arrupe’s belief in justice informed his understanding of the goal of Jesuit education. He said:

Today our prime educational objective must be to form men-and-women-for-others; men and women who will live not for themselves but for God and his Christ—for the God-human who lived and died for all the world; men and women who cannot even conceive of love of God which does not include love for the least of their neighbors; men and women completely convinced that love of God which does not issue in justice for others is a farce. (Pedro Arrupe: Essential Writings, Kevin Burke, Maryknoll, NY: Orbis Books 2004, p. 173)

In 1981 Arrupe suffered a debilitating stroke. An appointee named by Pope John Paul II served as interim superior until 1983, when Arrupe was forced to resign. He was wheeled in to the opening session of the 33rd General Congregation, and Arrupe’s final prayer was read to the community.

More than ever I find myself in the hands of God. This is what I have wanted all my life from my youth. But now there is a difference; the initiative is entirely with God. It is indeed a profound spiritual experience to know and feel myself so totally in God’s hands.

Pedro Arrupe on the Spiritual Exercises

“The Exercises are, in the last analysis, a method in the pedagogy of love—the pedagogy, that is, of the most pure charity toward God and toward one’s neighbor. They root out carnal and worldly love from the human heart, thus opening it to the beams of God’s love. A demanding love it is, calling forth in a person a response of love and of service. Service, which is itself love. This is the message of the very last paragraph of the book of the Exercises. ‘The zealous service of God our Lord out of pure love should be esteemed above all.’ In the Exercises we find terms and concepts which are logically reducible to one another: the ‘glory of God,’ for example, can be replaced by the ‘service of God.’ The same may be said of ‘praise’ and ‘reverence.’ Only one term is final and irreducible to another: love.”  (Pedro Arrupe: Essential Writings, Kevin Burke, Maryknoll, NY: Orbis Books 2004, p. 136-137)

Related Links
Teach Me Your Ways by Pedro Arrupe, SJ

Film promoting the life and work of Pedro Arrupe, SJ, and his lasting influence on Jesuit higher education and commitment to social justice. Georgetown University commissioned this documentary for the 100th anniversary of the birth of Fr. Arrupe.