The List is a weekly feature highlighting something remarkable, offbeat, or otherwise noteworthy from the world of the Jesuits and Ignatian spirituality.

Gary Smith is a 72-year-old Jesuit who has spent the last several years in refugee camps in Africa. You might say that these are some of the worst places on earth, and you wouldn’t be wrong. But they are also places where grace abounds, not least through the ministry of Gary Smith.

Gary’s book They Come Back Singing is an account of his time working with Sudanese refugees in the Rhino Refugee camp in northern Uganda. The book is mesmerizing. It’s mainly a pastiche of letters and journal entries which have an overwhelming cumulative impact. At least it did for me. The book shows Gary Smith to be not just a good and generous man, but a mighty instrument of God.  His humility allows God to work through him.  The closest comparison I can think of is the dying young priest in Georges Bernanos’ novel Diary of a Country Priest, who becomes a channel of God’s grace presisely because he knows he can do nothing on his own.

An excerpt from the book in Company Magazine recently won an award from the Propagation of the Faith.

They Come Back Singing is Gary’s second book.  His first is Radical Compassion, a tender and inspiring account (with some hilarious moments) of his work among homeless people in Portland, Oregon.

Gary is now working with refugees from Zimbabwe in a camp in South Africa.  You can find out more about him at his website. 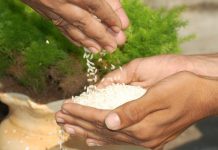 A Grain of Compassion

Jesuit Experience in Africa and Madagascar