IgnatianSpirituality.com®
More
More
Home Books Come to the Table: A Passover Seder for Parish Use 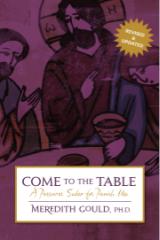 I try to live in sync with the liturgical year because doing so provides a glorious framework for daily living. I mention this because revising my book, Come to the Table: A Passover Seder for Parish Use during Advent felt downright weird.  But an author needs to do what an author needs to do, so that’s what I did to make  this second edition available before Lent.  Come to the Table is now available! Buy it here.

Come to the Table has undergone many changes over the years. Me too.

As an adult convert from Judaism,  I became acutely aware of the hunger I witnessed among Christians to connect more – and more authentically – with Jewish heritage.  As you might imagine, I’m often asked, “Why did you become a Christian?” I did not anticipate how frequently I’d be asked to teach and write more about the Jewish roots of Christian…everything.

Realizing that parishes already were and would continue offering a seder experience during Lent, I felt compelled (Veni, Sancte Spiritus!) to create one that I, someone raised Jewish, could endorse. Believing strongly it would be totally inappropriate to replicate a Jewish seder, I created one that draws upon core Christian concepts and scripture to enhance appreciation for the Last Supper as a Last Seder.

In addition to a liturgy, I provided commentary (in footnotes) about the long and often grievous history of Christian-Jewish relations. I wrote about preparing the heart as well as preparing the table.  I was happy with the first edition, written specifically for use by Roman Catholic Christians. Indeed, it has been used by many parishes and I treasure notes I’ve received over the years.

Change happens. As a practical matter, some instructions needed clarification.  Some users asked if they could simply photocopy the liturgy! Also, I could not ignore how changes to the Roman Missal would create “huh?” moments in my own text.

More important, my ongoing formation has sparked a deeper yearning to reach out to Christians beyond my Roman Catholic sisters and brothers, something I do in part by serving as abbess of @virtual_abbey.  As a result, the second edition has been revised for easy use by any liturgical church whose Holy Week observances would be enhanced by a seder.

For Jews, Passover is a holiday commemorating liberation from bondage as well as God’s faithfulness.  My hope is that the new edition of Come to the Table deepens users’ appreciation of Judaism and serves as a reminder that Jesus invited everyone to the table.  Thanks be to God.