The Voice “in Here”

The Hebrew prophet Elijah finds God speaking. We’re told that Elijah witnessed a “great wind, so strong that it was splitting mountains and breaking rocks in pieces.” But Elijah perceived that “the Lord was not in the wind,” or in the earthquake or fires that followed. Instead, later on, there was a “sound of sheer silence.” And Elijah heard God speak out of that silence. Those of us who heard this story as children may remember the poetic King James language for this encounter—Elijah heard God’s “still small voice” (1 Kings 19:11-13). 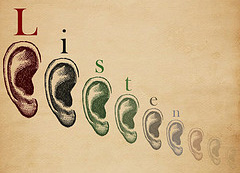 Perhaps, if we attune ourselves to hearing that still, small voice, we will find it whispered all around us and, more important, from within us. As the Quaker minister Parker Palmer put it, “Vocation does not come from a voice ‘out there’ calling me to become something I am not. It comes from a voice ‘in here’ calling me to be the person I was born to be, to fulfill the original selfhood given me at birth by God.”

And just how might we recognize the voice “in here”? The Protestant minister Frederick Buechner hears God communicating to us through our profoundest human concerns and interests: “The place that God calls us is that place where the world’s deep hunger and our own deep desire meet.” And one of my friends, asked how God might influence our job choices, said she saw God’s fingerprint on our skills and circumstances: “The gifts and talents God has given us are clues as to God’s plan for us.” Another friend spoke similarly, focusing on the passions and interests that not only motivate us to excellence but also touch all those who see our excellence in action: “What fuels one to perform with excellence has a spiritual quality that inspires, nurtures, and sustains one’s work. . . . I find when I experience extraordinary talent in someone—whether it is playing tennis, singing, preaching, caring for the sick—it reminds me of God’s grace and seems to be a very wonderful way for that person to use his or her time and energy.”

Anywhere that friend sees human excellence devoted to a worthy end, she sees God at work. Similarly, the nineteenth-century Jesuit poet Gerard Manley Hopkins found God’s voice and presence in countless everyday encounters: “For Christ plays in ten thousand places, / Lovely in limbs, and lovely in eyes not his.”

Perhaps God also speaks through our circumstances, life’s unpredictable, unexpected turns that eventually convince all but the most stubborn of us what Fr. Ciszek eventually learned while sitting in that jail cell in Soviet Russia: we don’t control as much of life as we imagined when we were invincible twenty-year-olds. We learn the truth of Jesus’ haunting prediction to the apostle Peter: “When you were younger, you used to fasten your own belt and to go wherever you wished. But when you grow old, you will stretch out your hands, and someone else will fasten a belt around you and take you where you do not wish to go” (John 21:18). Scripture scholars interpret that melancholy verse as the Gospel writer’s attempt to explain Peter’s gruesome martyrdom as something other than a total disaster for the fledgling, uncertain Christian community.

But who hasn’t lived Peter’s mystery in some small way? We find ourselves less in control of our destinies than we once imagined. Career plans don’t work out; bodies don’t respond as they once did; unforeseen tragedies, deaths of loved ones, and marital breakups shatter cherished dreams. Some dreams are not merely deferred but die.

Yet remarkably other doors open and other possibilities emerge. We find new ways to make our way forward in the world. Like Ignatius of Loyola, whose dreams of a military career shattered along with his leg, we stand up eventually and walk again. Indeed, our passage through disappointment and trauma can seem, in retrospect, a season of grace. We struggled back to our feet by our own courage and determination, but we also felt an empowering touch, as when Jesus reached out to a death-struck young girl and exhorted, “ ‘Talitha cum,’ which means, ‘Little girl, get up!’ ” (Mark 5:41). We do get up, and in the course of a subsequent lifetime, we often walk farther and climb higher than we first imagined possible. We see that great personal tragedies bear not only sorrow but sometimes the seeds of our own resurrections.

How are we to interpret the alternately serendipitous and disappointing, unexpected and unpredictable, courses of our lives? What is happening when death or financial disaster force us to reconsider what we want from life, when teachers or mentors find and nurture talent we didn’t know we had, when we succeed beyond our wildest imaginings, when managers steer our careers in fortuitous directions, when we aren’t offered the job we wanted so badly, when friends point out opportunities that we didn’t know existed, or when we persist in pursuing a personal passion against all odds of success, only to find that success and fulfillment eventually come? Do such cases merely vindicate human ingenuity, resilience, fortitude, and imagination? Or is God, too, at work in some ineffable way, as Hopkins says, “play[ing] in ten thousand places / Lovely in limbs, and lovely in eyes not his”?

Well, why not both? That’s how I read Ignatius, the former military commander and take-charge, type-A personality who nonetheless attuned himself to read God’s will in the subtle promptings of consolations and desolations. Or, as expressed in a great mantra of Jesuit spirituality, “Find God in all things.”

Walter Ciszek, SJ: Control the Controllables—by Focusing Your Energy Where It Counts
By Chris Lowney

Chris Lowney brings a personal perspective to his informal portrait of Fr. Ciszek, the priest who never gave up his faith despite being sent to Russian work camps for 20 years.