A friend of mine sent me this piece in the Washington Post written several years ago by William Blazek, SJ.  It’s the account of a ride one morning on the DC Metro–a delightful example of finding God in all things, including a moment of epiphany:

That ordinary morning, on a plunging high-speed run through Foggy Bottom, three stops north of the Pentagon, but before the Red Line transfer at Metro Center, the engines wound up like turbines on a tarmac and for a moment the car seemed to rocket towards someplace beyond the limits of space. Then, in a special way, at some ear-popping depth beneath the Potomac River, God washed right over me.

Hidden below the pilings and culverts, the mains and conduits whose tangles sustain the Capitol above, I rested in his love. He poured through me like an endorphin rush that crescendoed as the train sped along carrying its cargo of God’s people to their unique and personal destinies that day. Arriving near my clinic, I took another escalator to the surface, and went about my work.

The piece generated a load of comments. Many readers were appreciative, but many were furious to find such an open expression of faith in their daily newspaper. 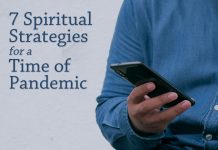 Seven Spiritual Strategies for a Time of Pandemic