This post is based on Week Five of An Ignatian Prayer Adventure. 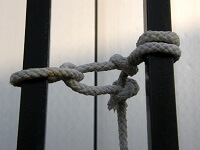 In Ignatius’s day a “standard” was another name for a military banner or flag. Therefore, the Two Standards meditation was a way of testing the retreatant’s allegiance. The overwhelming question was: Whose flag will you wave? I asked bluntly, “What kind of question is that? Who would ever intentionally choose to be on Team Satan?”

It seemed like a no-brainer. But when it came time for my prayer, it was much more difficult than choosing Christ over the evil one.

I entered what appeared to be a desert. It was dark and gloomy, and the wind had a distinct chill. Walking into the scene, I saw my friend and rabbi, Jesus, in the distance. As I looked closer, he had a cloth tied around his mouth and was tied up with heavy rope around his hands and waist. As soon as I saw this I ran to untie him, but I remembered that the choice wasn’t supposed to be this easy—it was a choice between the two greatest loves of my life.

It was then that I noticed something on the opposite side of Jesus. I saw an office desk, cluttered with countless books and magazines, and it, too, was tied up with rope. I was confused until I noticed that the books on the desk were my own—this was my future work desk. There were countless books and articles that I had written. I came closer and began to read title after title with my name on the bottom in an aesthetic font, “JURELL G. SISON.” Some even read, “New York Times Bestseller.”

These were my two standards. I was being forced to choose, and it wasn’t as simple as choosing between “Team Jesus” or “Team Satan.” These were the two greatest loves of my life. I always dreamed of publishing a book that would bring life to people, one that would help them discover faith at its finest. But this passion was taking over like a cancer. It was killing me, so I had to kill it. Needless to say, I chose Team Jesus, but it wasn’t without internal struggle and reflection about my priorities.

When we forget to hold God as the center, something else will surely take God’s place. When we take our focus off of God—shoving love, humility, and service to the side—something insidious creeps into us, turning our passion into poison. Sometimes we create our own demons without even knowing it.

The Two Standards meditation isn’t a choice between the good and evil that’s out in the world—it’s a choice that lies within one’s own heart. So whose flag are you waving? 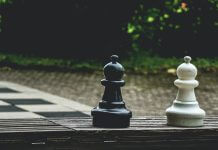