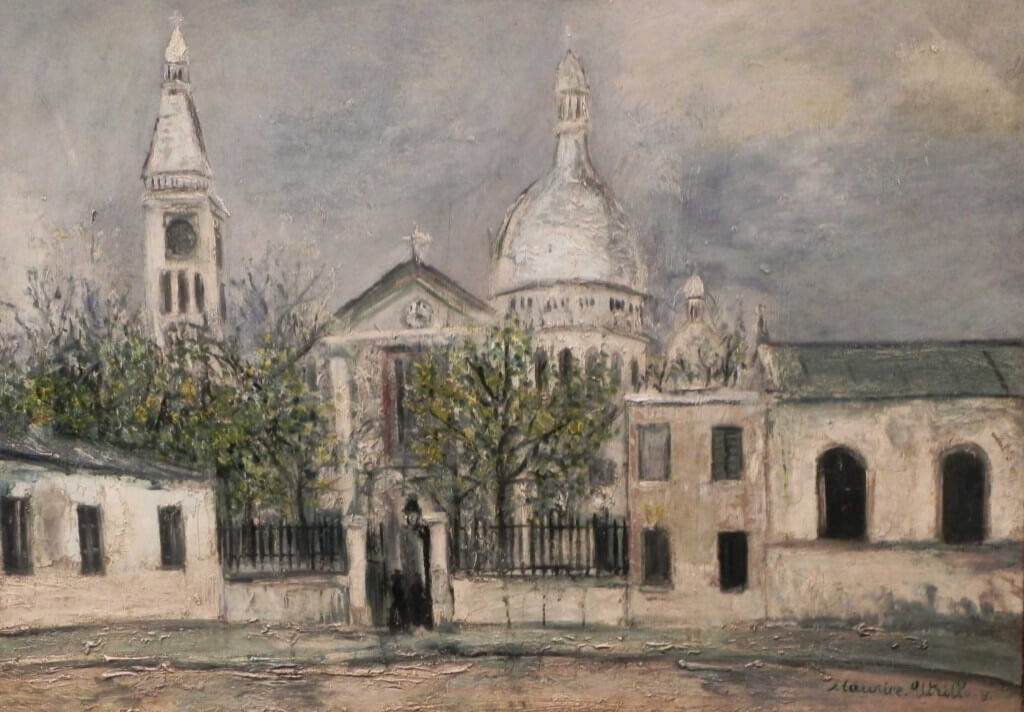 In 1534, Ignatius and his companions went to the church of Sainte Pierre in the village of Montmartre north of Paris, and  took vows to work together as a company.  It was an important moment because this band of brothers soon became the first Jesuits.  When my wife and I went to Paris a couple of weeks ago to celebrate our 40th wedding anniversary, I was eager to visit this spot.

On the day we visited, Sainte Pierre didn’t look much like the church in the painting by Maurice Utrillo above.  Trucks and cars were parked in front and the small courtyard was filled with booths for a street fair.  We were stunned when we walked inside.  An experimental video with some disturbing imagery was playing on a screen in front of the altar, accompanied by a loud and harsh sound track.  The video was part of an arts festival.  Either the pastor or a friend of his had created it; our French wasn’t good enough to fully understand the explanation from a somewhat chagrined church secretary.

This wasn’t what I was expecting.  I was disappointed and a little angry. But then Ignatius and his companions didn’t get what they were expecting either when they made their vows.  They thought that God would send them to serve in the Holy Land.  They implemented Plan B — putting themselves at the disposal of the pope — when travel to the Holy Land proved impossible.

Things change.  Montmartre was a quiet village on a hill overlooking Paris when the companions made their vows in 1534.  No doubt they wanted a quiet place to pray and reflect.  Today Montmartre is a lively, noisy place with throngs of Parisians and tourists enjoying the restaurants, cafes, and art galleries.  It’s a place well-suited to the Ignatian spirit.

We went back to Sainte Pierre a few days later when the arts festival was over.  The video was gone.  The church was quiet.  The light was soft. (At the left is stained glass window depicting St. Ignatius.)  It was a good time to thank God for what happened here in 1534.