I have a friend whose family members hang onto grudges and slights. They are people who remember everything ever done to them, against them—and by whom. They just can’t let of the wrong that has been done to them and they carry it with them every day.

“Refusing to forgive someone who has wronged you,” he says, “is like taking rat poison and hoping the rat dies.”

Forgiveness is an incredibly difficult task, and for many whose lives have been so much more difficult then mine, perhaps a seemingly impossible job.

That’s why I was so struck by a brilliant passage in Loyola Press’ Thrift Store Saints by Jane Knuth. She writes about the customers she meets in her volunteer work in a St. Vincent de Paul store. One day a woman comes in for clothes, a woman whose life and body speak of manual labor, long hours on her feet and poverty. She chooses the clothes she needs and as she stands at the checkout counter, she begins to talk about her life.

“Some church people, they talk about forgiving all the time, but they don’t have any idea how hard it is to forgive because I don’t think they’ve ever had something really wicked done to them. I’ve had a hard time forgiving my dad. I left home when I was 15 because of him.”

She continues talking to Jane as the clothes are bagged. “Don’t get me wrong. Forgiving is the most important thing. If you can’t forgive, it eats you up inside.” She says she is now the only one in her family who speaks to their dad. Jane is stunned at this woman’s insights and asks how the woman how she forgave her dad.

“Well, you know how church people say you have to forgive because Jesus forgave the people who crucified him? They say he forgave them while he was hanging on the cross. I heard that over and over.”

She pauses and explains to Jane that what “they say” isn’t quite right. She looked it up in the Bible, she said. “What actually happened, what he really did say was: â€˜Father, forgive them, they don’t know what they are doing.’ He was talking to God, not to them. He was praying for them.”

What a profound lesson from a streetwise theologian who apparently found the peace she was looking for. May we all find that peace and ability to forgive.

Lenten Read-Along: Why Should We Have a Resting Point in Our Process of Forgiveness?

Lenten Read-Along: Where Do We Begin with Forgiveness? 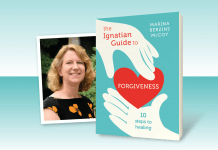