The Language of the Cross

By Joseph A. Tetlow, SJ
From Making Choices in Christ 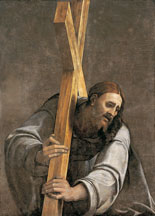 Some suggestions given by Master Ignatius for praying on Jesus’ passion help bring it into the ordinary days of our life. We begin, as in any other contemplation, by asking who is present, what they are saying, and what they are doing. But we go on to do three things: We consider what Jesus suffered in his humanity and “what he wanted to suffer.” We consider how the divinity hid himself, not intervening. And then we beg to appreciate that Jesus did this for us.

The Human Part of Jesus’ Suffering

Jesus’ brutal physical sufferings can be painted and sculpted, but it is not so easy to put the human part of what he suffered into words. Perhaps we have to start with this: Jesus was the victim of political and religious abuses. His murder was politically inane, because in the long run the abuse of political power with violence wipes out what it pretends to achieve: right order. Then again, his execution was religiously senseless, because right from the start violent religious persecution destroys the holiness of the persecutor, and holiness is what religion is about. So Jesus suffered an inane and senseless horror, an experience only too many of us are familiar with today. This is what he “wanted to suffer”: to live to the very end in solidarity with humankind, familiar with inanity and meaninglessness.

Jesus suffered as we all suffer. Each one of us, when we suffer bitterly, can hardly believe that there exists any suffering like our own. But suffering is like language: my words are not merely mine; however much I have made them my own, they belong to all of us. Suffering is among us, and no suffering is any one person’s possession. I can talk about “my” cancer, but many others around me are suffering with it, too.

None of us is at all likely to suffer the physical torture that Jesus suffered (God grant this freedom to us all). But each one of us inescapably suffers physical pains and decay. This human suffering that afflicts all of us is what Jesus wanted to suffer. He was no masochist. He chose to embrace even bitter suffering so that he could be like us in everything—except sin—and by his obedience turn the whole of human experience from its journey into death and onto the way of eternal life.

Master Ignatius tells the one praying on Jesus’ passion to “begin with great effort to strive to grieve, be sad, and weep.” It is never easy to suffer, and it is particularly difficult to enter into another’s suffering. We have to work to grasp that Jesus, on his cross, knew the terrifying vacuum of God’s hiding and leaving him to the merciless experiences that scotch life. Most of us will sink into that dreadful feeling at some point in the chaos of our world.

Despair is a choice just as much as hope is a choice, and Jesus did not suffer despair because he refused to. He trusted that the Father would save him; he said more than once that he would die and that he expected to rise from the dead. On the cross, he trusted that his suffering made some kind of sense, to be revealed when the Father chose. Every day of his human life, he wanted to do whatever he could to alleviate the suffering of those around him. But he was thwarted. He had to die in the hope that he would live again in our flesh.

Those who really do know and love him will suffer this way, his way. They will also see the suffering of all the people whom God puts in their life world and strive with great effort to grieve with them and do whatever they can to alleviate their suffering. Right here is the deepest spiritual root of the impulse to work for peace and justice. Anything less would be an unworthy motive for those who love Jesus Christ.

Jesus’ passion brings us to embrace the world as it really is: full of violence and pain. We refuse to let religion and grace become an easy analgesic, buffering us from the real sufferings around us. Instead, we embrace whatever suffering comes into our lives as no longer senseless. Our suffering has a meaning in “the language of the cross” (1 Corinthians 1:18). We join the sufferings of the crucified Christ, the sufferings of humankind that he chose to embrace. We cling to Jesus, to “a Christ who is the power and the wisdom of God” (1 Corinthians 1:24). When we do less, we are using our faith in Christ as a pain pill.

Excerpt from Making Choices in Christ by Joseph A. Tetlow, SJ.