Matt Emerson raises some interesting questions about involving others in the discernment process. 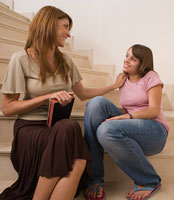 When it comes to Christ, to being his disciple, we very well may have to divert from the path that those closest to us wish we would follow. Our choices might have to disappoint our family.

But this prospect is not universally appealing. It wasn’t for men and women of the first century, and it’s not for students of the twenty-first. For many, it’s inconceivable that they would make a decision apart from their nearest community, their families. The idea of doing something different than what their families want seems to be an insult, a refusal to respect and honor those who formed them. Of course, someone might point out that that’s precisely the reaction that Jesus’ first followers had. They, too, were shocked at what Jesus said. They, too, were alarmed at the obedience he commanded over and above the obedience one gave to family.

But we cannot leave it at that. We cannot expect young men and women to just “get it.” We need a spirituality that meets them in their context.

Emerson doesn’t provide the answers in his article, but the questions regarding options for communal discernment merit thought, especially for those who work with people most likely to be making major life decisions.