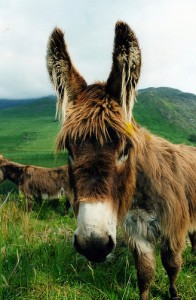 During July we’d like to hear from from you about what Ignatius means to you.  To get things started, here are some thoughts about a well-known incident in the saint’s life.  Please weigh in.  Put your reflections in the comments.

Shortly after his conversion, the ex-soldier and courtier Ignatius was riding down a dusty road in Spain in the company of a Muslim Moor.  They were discussing religion, and, not surprisingly, they disagreed on a few points.  The Moor angrily ended the discussion and rode off.  As a parting shot, he made some insulting remarks about the Blessed Virgin Mary.

Ignatius was outraged.  He thought it might be his knightly duty to defend the honor of Mary by killing the Moor, but he wasn’t sure that would be consistent with his new faith. He left the decision up to the donkey he was riding.  They were approaching a crossroads.  If the donkey took the road that the Moor took, Ignatius would follow and kill him.  If the beast took the other road, he would let him go.  The donkey took the other road.

What impresses me about this story is that Ignatius told it.  He included it in his Autobiography, which he wrote near the end of his life.  At the time Ignatius was a much-honored churchman.  He was regarded as a master of discernment and a font of spiritual wisdom.  So Ignatius told a story about himself that made him look foolish and dangerously misguided.  I like the humility of that decision.  Ignatius is saying to me: beware of pride.  You’re not as smart as you think you are. 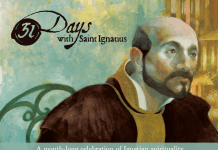