I’ve recently pondered how the theme of God’s justice fits into the Spiritual Exercises. Our traditional understanding of justice is getting what one deserves. God’s justice, however, is more about a desire for us to be whole, based in love and compassion. 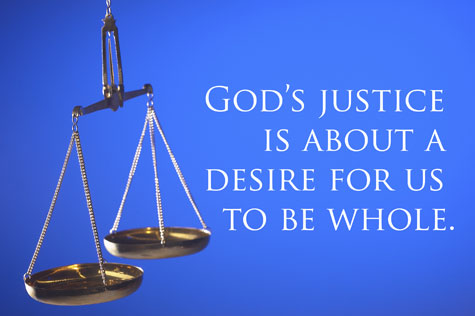 St. Ignatius was a Castilian military man, part of a justice system of fighting, capturing, and revenge. After the Castilians captured and occupied the land of Navarre, the citizens tried to drive them out and in the battle they besieged Ignatius’s family castle. In Ignatius’s autobiography he tells how he considered taking revenge on a traveler who spoke ill of the Blessed Mother. Ignatius’s view of justice was very different from God’s justice.

The transformation of Ignatius’s understanding of justice appears in the First Week of the Spiritual Exercises, when a retreatant spends time recounting his or her personal sin. After a feeling of self-loathing for one’s sin, the retreatant discovers that God has remained faithful and loving, and that the saints continue to pray for him or her.

The Second Week opens up the reflection to social sin as well. We witness how Jesus revealed the reality of systemic sin and corrupt systems of justice in his day. Jesus’ justice was about calling people like the Pharisees or the adulterous woman to greater wholeness. His justice was not about condemnation, but about compassionate love.

In the Third Week of the Exercises, God’s justice plays out on the cross, not condemning the world for their sin but taking it upon himself. On the cross Christ forgives his killers. It’s a kind of justice that’s foreign to human nature.

Finally, the Fourth Week reveals God’s justice through the gift of love that pours out upon us, bringing us healing and wholeness. The Exercises describe “justice, goodness, mercy, etc., descend[ing] from above as the rays of light descend from the sun, and as the waters flow from their fountains, etc.” (SE 237)

How do we live out God’s justice in our lives? We can learn from the Spiritual Exercises and the example of Jesus. God remains faithful, forgives, calls everyone to greater wholeness, never condemns, and pours out love and mercy. Instead of taking revenge or trying to ensure perfect fairness, we can approach all (including ourselves) with compassion and a desire to make whole. This is true justice. 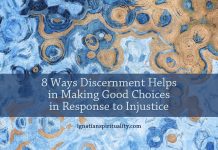 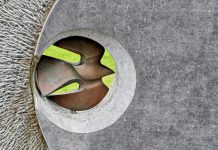