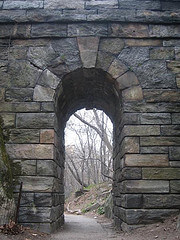 A story from Tattoos on the Heart, by Greg Boyle, SJ:

At three o’clock in the morning, the phone rings. It’s Cesar. He says what every homie says when they call in the middle of the night, “Did I wake you?”

I always think Why no, I was just waiting and hoping that you’d call.

Cesar is sober and it’s urgent that he talk to me.

In this early morning call Cesar did not discover that he has a father.  He discovered that was a son worth having.  The voice broke through the clouds of his terror and the crippling mess of his own history, and he felt himself beloved.  God, wonderfully pleased in him, is where God wanted Cesar to reside.

Jesus in Matthew’s gospel says, “How narrow is the gate that leads to life.”  Mistakenly, I think, we’ve come to believe that this is about restriction.  The way is narrow.  But it really wants us to see that narrowness is the way. . . . Our choice is not to focus on the narrow, but to narrow our focus.  The gate that leads to life is not about restriction at all.  It is about an entry into the expansive.

Nudge Our Image of God

God Is There All the Time