IgnatianSpirituality.com®
More
More
Home People Sharing the Wisdom: What I Learned from My Grandfather About Art and...

“Boys, stop throwing that ball in this room! I have one room of nice things. One. Go play somewhere else!” I screamed as I caught a ball just as it came dangerously close to shattering a glass owl vase. As I handed the boys the ball and ushered them out of the room, I stopped to run my hand along the wood grain of the table that held the now-safe owl vase. Its dark-red stain was thankfully still as nice as the day my grandfather finished it. I stood back to admire the table as a whole, its beautiful symmetry and its base that held at its center four delicate strings. It always reminded me of a harp waiting patiently to be played.

This table is the one item of my grandfather’s that I still have—and I treasure it as much for its beauty as for what the creation of it taught me about him and, subsequently, about myself. I remember seeing it for the first time when it was still a work in progress. I had told him then how much I admired the piece. Smiling, he said, “You got a minute? Let me show you something.” 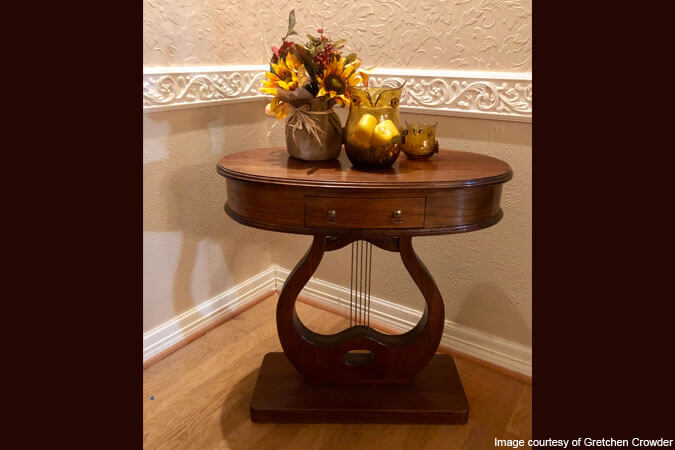 Out of his pocket, he pulled a folded piece of paper. On it was a tiny picture of the table. Over the picture was a grid of perfectly straight lines sketched carefully in pencil and surrounded by calculations. It looked vaguely like the structural plans I had seen my father pouring over so many times at his desk over the years. “See, here? This picture caught my eye in a magazine one day, and I thought, I can build that. So, I scaled it up just right, bought the wood, and started to work.” I remember being struck by how skilled my grandfather was, as I looked from the small image of the table to the full-sized replica before me. He only had a seventh-grade formal education, but he had built a life from it. And he learned, somehow, along the way, all the tools he needed to build furniture, homes, and a future from which I now benefited.

Noting my surprise, he put the paper away and took me on a tour around his living room, showing me other things he had created that I had somehow missed before. There were beautiful paintings and sketches, pieced together with such care and hung just right on the walls of the home he had also built. As he showed me each beloved piece, I realized he was showing me more than just beautiful works of art. He was teaching me, as he had for sure taught my father before me, to never look at a dream as if it were too small a thing to be realized. It can always be scaled with the right measurements of determination and, above all, faith.

Order copies now at the special price of $14.98—50% off the cover price of this award-winning book.

Sharing the Wisdom: What I Learned from My Grandfather About Courage and Nature