The year was 2001. I was part of a group of about 25 people who had gone on a pilgrimage to Ignatian sites in Spain. It was mid-October, about a month after the 9/11 terror attacks. I had been working as an editor for Loyola Press for a few years and was glad for the chance to learn about Ignatius firsthand. I was interested in Ignatian spirituality, but, to be honest, I had no special passion for it.

The pilgrimage began in Loyola, the small town where Ignatius grew up. His home, a small, squat castle, is still there. So is the room where he was taken in 1521 to recover after a cannonball shattered his legs during a battle in Pamplona. Our group celebrated Mass in that room, now a chapel. During the Mass, I heard a small voice say, “Something important began in this room long ago. I want you to be part of it.”

This startled me. I’m not someone who hears voices in prayer. I thought about it. I wondered if I should do anything about it. I thought not. After all, I was working for Loyola Press. I was already part of something that started in that room.

The voice that I heard in Loyola wasn’t talking about being a good employee in an Ignatian ministry. The Lord wanted me to let myself be transformed by the Ignatian spirit. I had the good sense to open myself to that, and, sure enough, it happened. 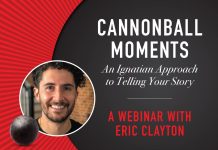