Historian John W. O’Malley, SJ, ponders Jesuit worldliness  in a recent article.  He starts with a Jesuit joke, but the “worldliness” of the Jesuits is no joke.  It’s real.

The decision to operate schools gave the Society a big shove in the worldly direction.  But O’Malley traces the roots of worldliness to the Jesuits’ early commitment to works of mercy:

The Franciscans and Dominicans, of course, also engaged in works of mercy. Charity, after all, is intrinsic to being Christian. Peculiar to the Jesuits, however, was the explicit articulation of works of mercy as an essential element of what the order was about. They were not only preachers of the Word and ministers of the sacraments, but also and professedly agents engaged in works of social assistance and devoted to the “promotion of the common good.” 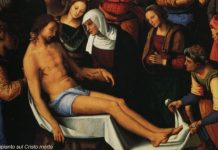 Joseph of Arimathea and Burying the Dead

Mercy and Growth in Relationship with God

What’s Difficult Is the Follow-Through