I drive up Eggert Road nearly every day. It’s a slight shortcut that gives me four extra minutes on my daily commute. Time is the most precious of commodities. I was slightly hungry and had lunch in my bag, but I required some dinner as well, so I decided to save some time by picking up a sandwich on my way back to work. I made that decision in the four seconds it took to spot the Subway on the corner. I signaled left and pulled into my turning lane. I stopped for the red and then received the green arrow to turn. I proceeded into the intersection, and I saw the SUV headed right for me. I braced for impact as there was no way to avoid the crash. The truck hit my sleek little car with a violent crunch and pushed me towards the center console. I felt deep heat in my side and glass in my shoe. My car came to a stop but not before tapping a second car driving through the intersection on my right.

I somehow was OK. Seat belts and airbags do indeed save lives. The “curtain” was down on my driver’s side, and I looked up to see several people running towards my car.

I thought, “Either I’m alive or death is a lot like being alive.” Someone asked if I was OK and I replied that I thought so. I tried unsuccessfully to pry off the seat belt, but it was stuck. I yanked it with both hands, and it came undone. I climbed over the center console, opened the passenger door, and got out.

I steadied myself and was fine. Someone said, “Turn the ignition off! There’s a lot of fluid there.” So I did. I heard someone say something like, “Wow! This guy is amazingly walking.”

My only thought was that I was somehow alive and walking, when I could have been severely injured or worse. The driver of the third car came over to check me out. He said, “I’m Vince. I was driving next to you. I saw everything. He ran the red! You OK?”

I nodded and we shook hands. “Brand new car!” I said and shook my head. “Well, at least we’re OK. Is this guy over here the driver of the car that hit me?” I asked, pointing towards a 60ish man with a mustache.

Blood trickled from his hands and I pulled out my phone to call the police, but they were already en route. I called my wife and sent shock waves into her system but told her I was fine. She called friends to get her to the hospital to meet me there since we are a one (and now zero) car family.

I turned towards the driver. “Hey, I’m Mike. What’s your name?”

The cops arrived and took statements. An ambulance came and began to push a stretcher in my direction. I saw Dan leaning against a pole. I had forgotten his name. I asked again.

I had preached a reflection earlier that morning on God’s mercy. And that voice took over.

I walked over to him, “Hey, accidents happen. No worries. Insurance companies will work it out. Grateful that you are OK, too.”

And then I reached over and embraced him.

“Take care,” I said as the ambulance folks whisked me away.

Who among us doesn’t have four seconds he’d like back? A harsh word, a poor decision, an angry moment? The truth is that we all have moments that we would want to take back, and for some of us the results have been deadly.

Dan’s decision could have been just one more deadly decision in a stream of poor decisions made by us all. The communion of saints reminds us that we are also all sinners, in need of God’s constant embrace.

So I released my resentment and hoped the finances would sort themselves out. Dan was issued a citation, and the hospital cleared me to go home without any serious injuries and with some medications for pain relief for the next few days.

I am somewhat sore as I write this today, but soreness is thankfully all that I have wrong. I can walk and breathe and hug my wife. Gratitude almost always leads to peace.

Make me a channel of your peace, Lord. Amidst the mangled wreckage of four-second decisions, perhaps what we should most pray for is to release those who make the poorest of decisions from our hatred and our dark desires for revenge and instead seek gratitude. 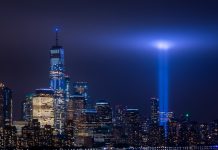